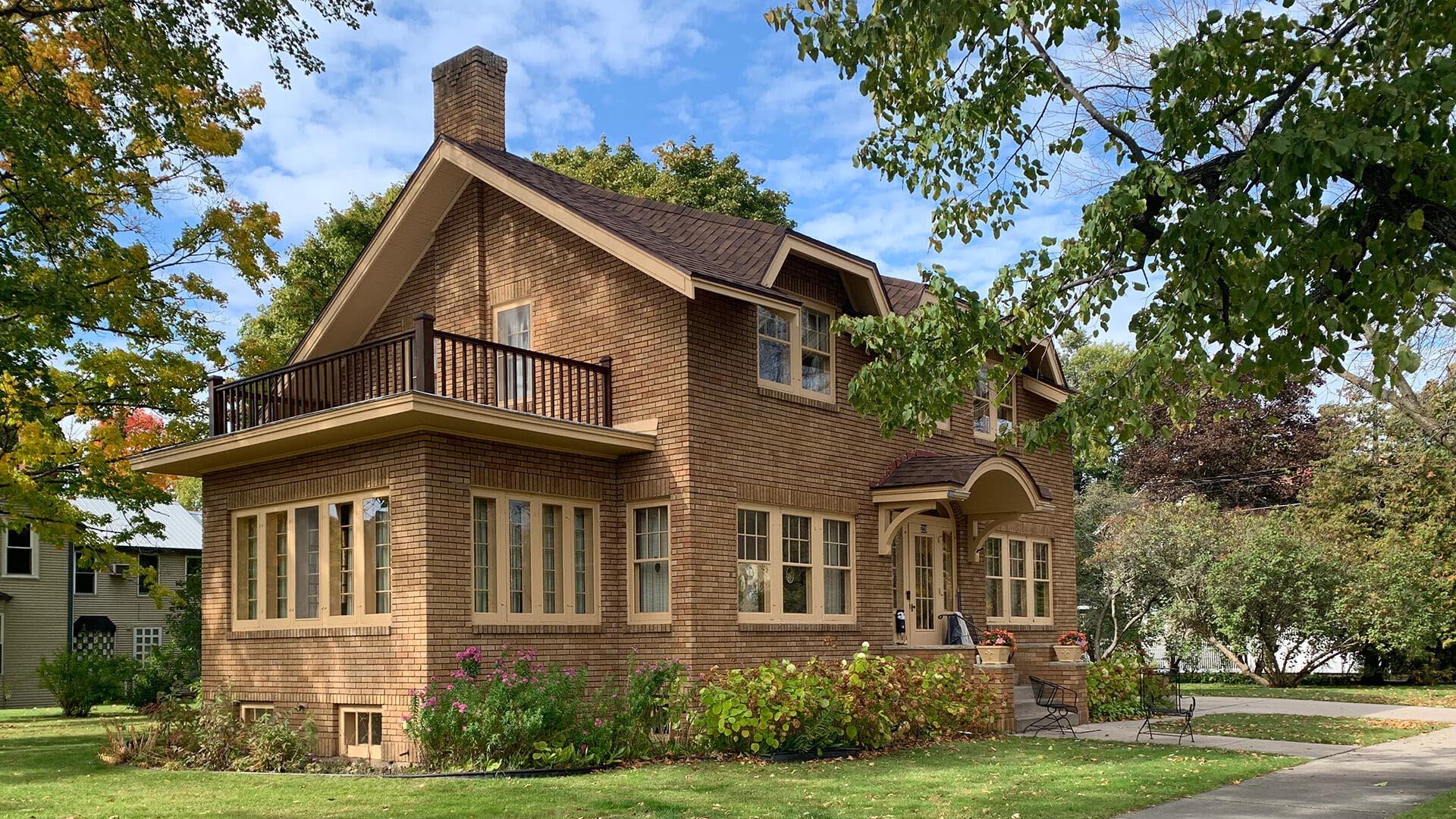 Walk the historic neighborhoods of Escanaba all year

When you visit Escanaba, wear your walking shoes. Not only does the area have beautiful, walkable nature trails and waterfronts, but you can enjoy Escanaba’s historic downtown and neighborhoods on foot, too. It’s not just a sightseeing experience. Your historic walking tour includes places to shop, dine, try local craft brews and enjoy art galleries, too. Follow our scenic sidewalks all year round! 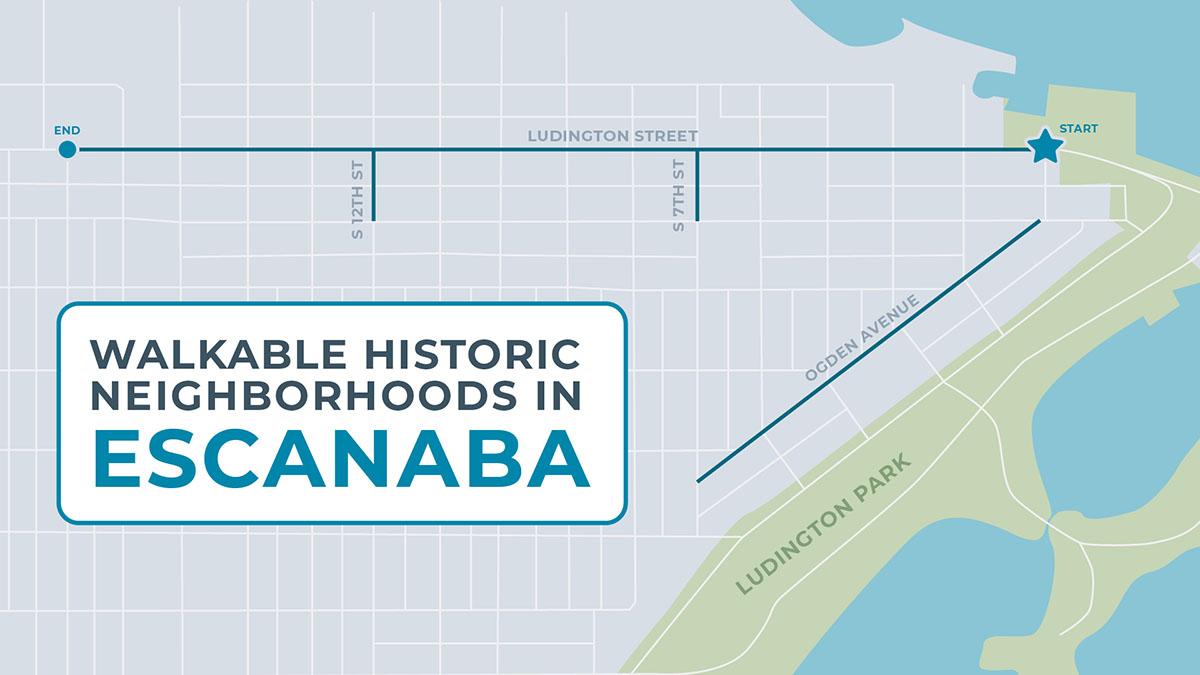 When they platted the city of Escanaba in 1864 on the shores of Lake Michigan, it already had a railroad and an iron ore dock to propel it forward. It didn’t take long for this central Upper Peninsula town to grow. You can see the city’s history unfold in the Central Historic District of Escanaba. It runs for over a mile from Ludington Park along Ludington St. with spurs into the historic Ogden neighborhood. Park your vehicle and enjoy your tour from sunrise to sunset.

Begin your downtown historic walking tour on the 200 block of Ludington St.

Most of Escanaba’s downtown buildings are two stories dating from the early 1880s to the mid-1960s. Your first destination, however, is the stately, three-story Nelson Ludington’s House of Ludington. With some parts of it built in 1864, it is thought to be the oldest operating hotel in the Upper Peninsula. Its distinguishing features include an exterior glass elevator and Queen Anne-style domes overlooking Lake Michigan, located two blocks away. Also, east of South 2nd St. is an inscription about the very first settlers, members of the Noke tribe. 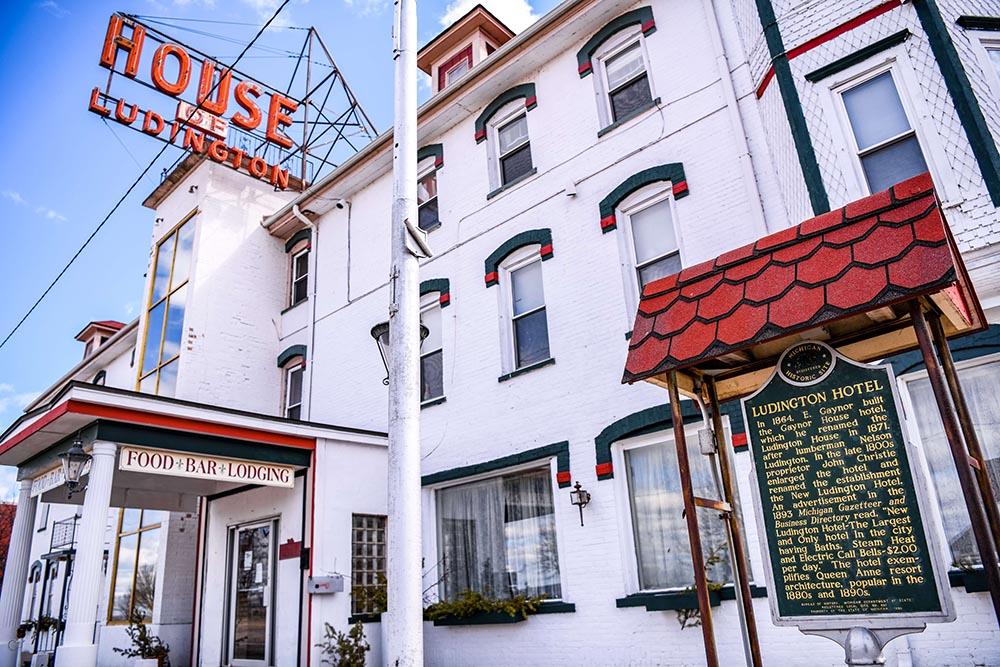 Proceed through the 300 block

In the 300 block, see the Modernist, two-story yellow brick and masonry Delta County Building that houses the courthouse. They constructed the first story in 1961 and added the second story in 1994. Across the street is the red brick Escanaba State Office Building.

You will find a late Victorian-era commercial structure at 413 Ludington, constructed in 1887.

The 500 block contains many historic gems

In the 500 block, you will see a mix of 19th and 20th century structures. The building at 500 Ludington was built pre-1884. Harbor Tower Apartments, completed in 1970, is the second tallest structure in the Upper Peninsula. In this same block, you will walk past the former Christensen’s Furniture Building at 504 Ludington, which dates back to 1899. It’s had multiple renovations since. Next to that is another commercial building built in 1899, which was also updated over the years. At 524 Ludington St., you can see the 1910 Neoclassical former U.S. Post Office and the Elks Hall building, which was renovated in 1925 to reflect Mission-style architecture. 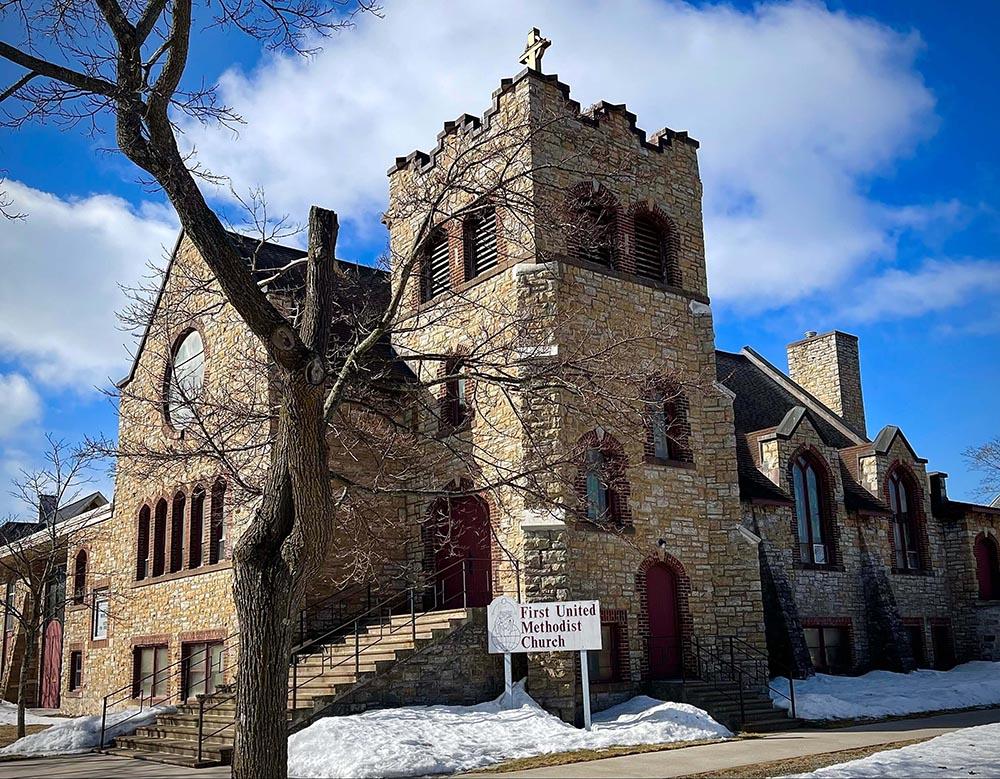 The 600 block is full of 1890s sandstone structures

As you proceed onto the 600 block, look for examples of 1890s Lake Superior sandstone buildings representing Romanesque architecture. They include the Daley Block and Masonic Block and Michigan Building. The Rathofonlist National Bank Building was constructed in 1903. The Delta Hotel, which opened in 1914, is also on this block. It is now home to the Bishop Noa Home for Senior Citizens, the Delta Apartments and a relaxing place to catch lunch or dinner, Hereford and Hops Restaurant and Brewpub. Take a side trip on South 6th St. to 2nd Avenue South to see the First United Methodist Church, modeled after a church in Leeds, England, and dedicated in 1870.

Continue your walk along the 700 block with a side trip down South 7th St.

The 700 block offers more examples of Lake Superior sandstone buildings. At 716-718 Ludington St., you will see the New Peterson Building, which was first constructed between 1899 and 1906. The former Erickson Dry Goods Store Building went up in 1914 and the former Escanaba National Bank in 1917.

Take a side trip to South 7th St. to see the 1902 Carnegie Public Library building, the nearby 1939 St. Joseph Catholic Church and the associated 1938 William Bonifas Fine Arts Center. Stop inside the arts center to see the creativity of regional artists and performances by actors and musicians. At the Intersection of South 7th St. and 1st Avenue South is a marker near 201 South 7th St. It notes the site of the first public schoolhouse in Escanaba.

At 301 South 7th St., you can also see the Colonial Revival Herman Gessner House built in 1900. This home has only changed hands two times since Gessner built it! Gessner was the owner of the Fair Savings Bank/Fair Store in the 1000 block of Ludington St. 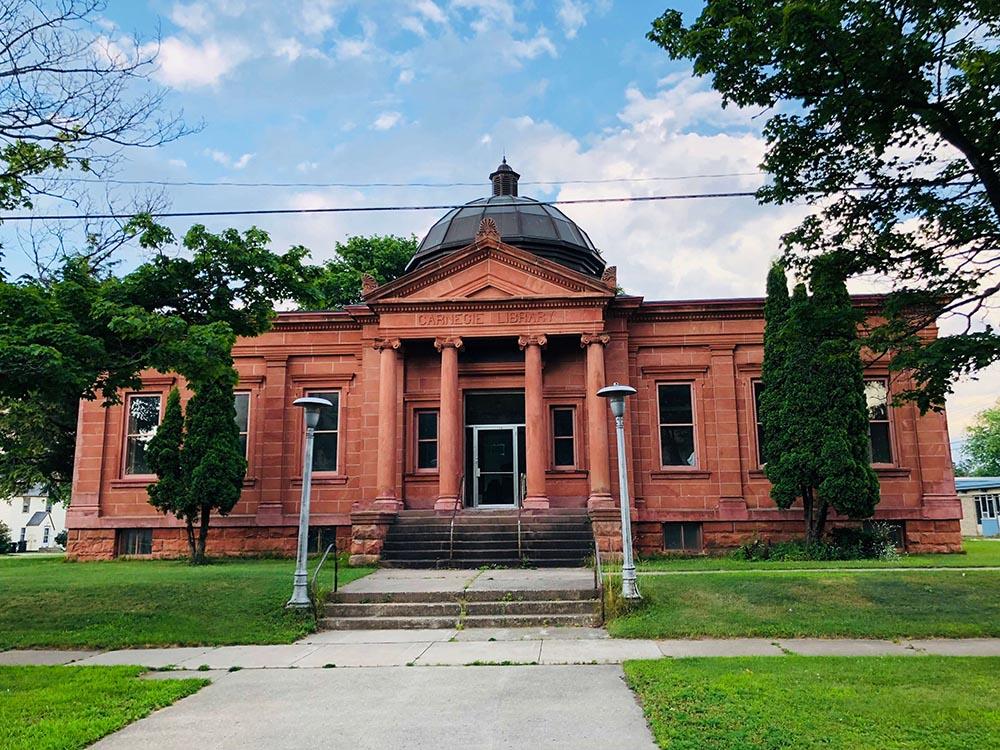 The 800 and 900 blocks of Ludington St. offer a mix of early to mid-1900s commercial brick buildings. In the 800 block, look for the 1935 Streamline Moderne architecture of the Michigan Theater and the distinctive style of the 1930 Swanson’s Service Station. In the next block, see the 1914 Flemish Revival Delft Theater, the nearby Arcade Recreation Parlor Building and the Bonefeld Furniture Building built in the early 1930s.

The 1000 and 1100 blocks have a series of early 20th-century commercial buildings, including two former theater buildings — the four-story, 1896 Fair Savings Bank Department Store/Ben's Theater (renovated in the early 20th century) and the 1906-13 Grand Theater. You will also see the 1925-29 J. C. Penney Building.
Walk up 11th Street to see the red sandstone Romanesque old City Hall and the 1912 Neo-Gothic Bethany Swedish Lutheran Church and associated parsonage. 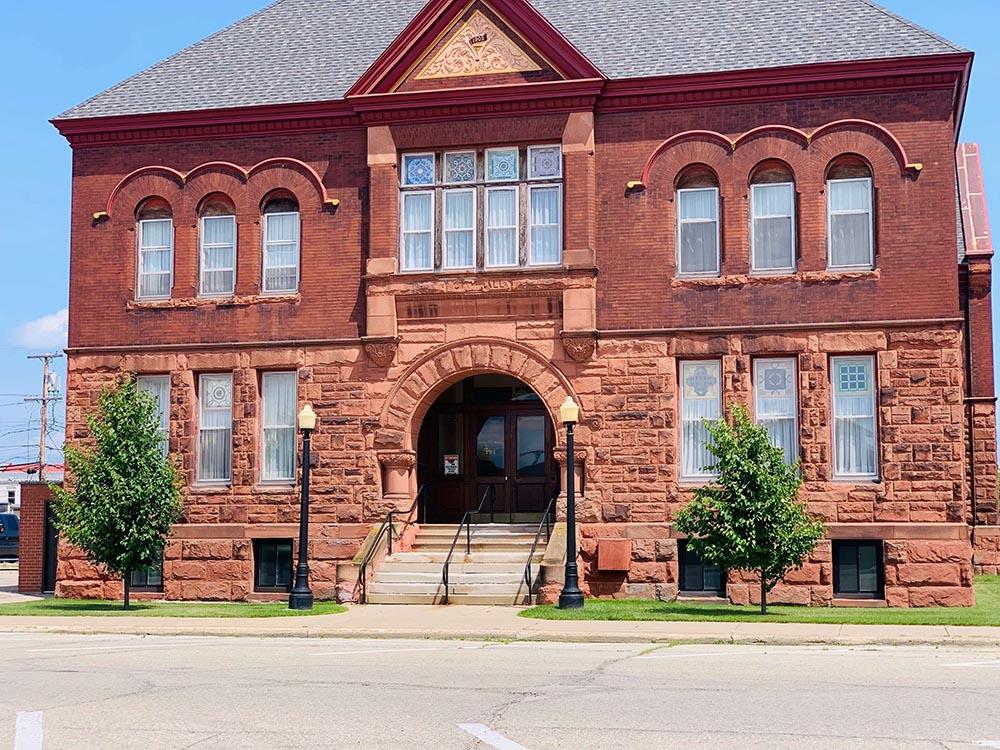 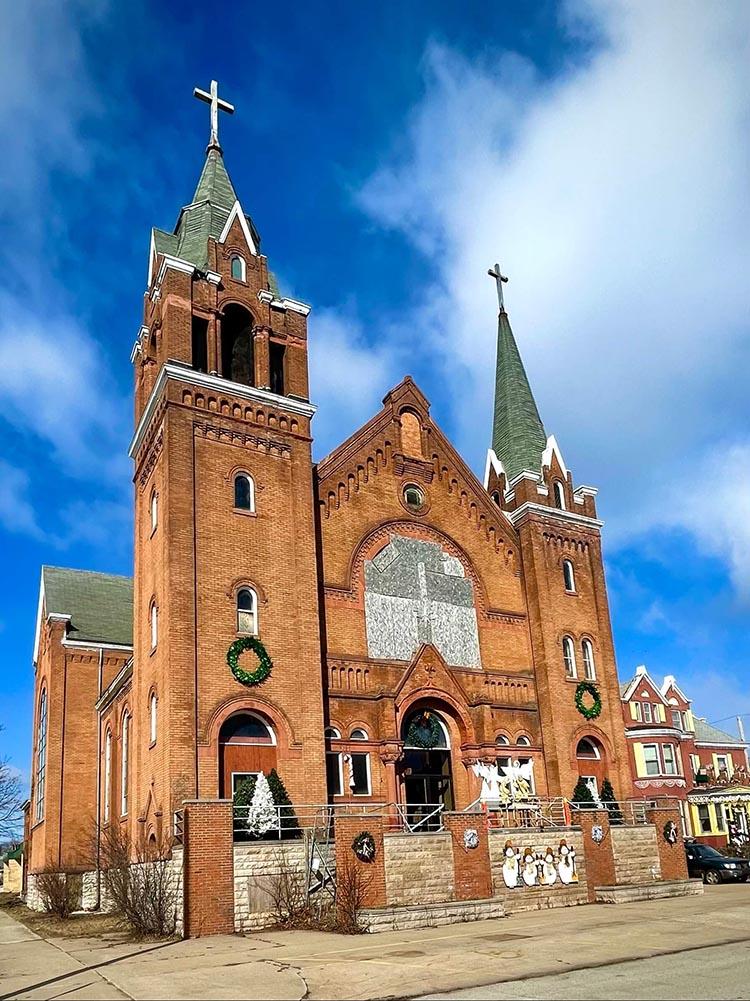 Return to the 1200 block of Ludington St. to see more remodeled two-story brick commercial buildings. Two standouts, however, are the 1910 three-story Kratze Department Store building and the 1892 two-story North Star Building (look up to see its distinct and decorative cornice).

Cut down 12th St. to walk past the former St. Patrick Catholic Church that has graced this street since 1902.

Treat yourself to some historically delicious candy in the 1300 block

The 1300 block of Ludington St. has a must-stop destination to re-energize from your walk. Sayklly's Candies has been serving up delicious chocolates and candies year-round since 1906. Other buildings include the 1930s-era UNeeda Lunch Diner (remodeled in the 1950s) and, on the corner, the 1904 three-story Jepsen Block.

Continue along the 1400 and 1500 blocks to see on the south side of the street, the 1920s Northern Motor Company. It has been a Ford automobile dealership for over eight decades. You will also see the 1914 Home Electric Building and the 1915 Clements Building (notice the distinctive polychromatic brickwork). On the north side of the street is the 1930-31 Neo-Romanesque Escanaba Junior High School.

Your downtown historic walking tour comes to a close in the 1600 and 1700 blocks of Ludington St. The Richter Brewery Complex was built around 1900. It features a two-story Classical Revival administration building and the nearby four-story Brew House. There are also two industrial buildings on Stephenson Avenue. One, constructed in 1892, housed cars from the Escanaba Street Railway Company.

In the 1700 block, there are two commercial buildings dating back to the 19th century and a 1930s block-and-tile former service station. You will also see a former Dairy Queen built in 1950 and a broad front, a gabled structure that dates back to the early 1900s. It once housed the Stegath Lumber Company.

For a more in-depth description of these sites, read more in the National Register of Historic Places in Escanaba.

A visit to Escanaba would not be complete without spending time at Ludington Park along the Little Bay de Noc of Lake Michigan. Two historic places to see are the Delta County Historical Museum and Sand Point Lighthouse.

One block from the park is the historic Ogden Avenue Neighborhood, a very walkable, pleasant few blocks. Timber barons built most of these beautiful homes between 1860 and 1900. Here are the stories about a few of them.

The Tilden House, a big frame building in the 300 block of Ogden Avenue, is one of Escanaba’s oldest landmarks (circa the early 1860s) and first social centers. It was named for one of its first guests, Samuel Tilden, a New York financier.

The Simon Greenhoot House or Shipman House at 407 Ogden Avenue is an 1890 Italianate that has undergone significant alterations. Its original owner was a prosperous timber baron. Despite anti-Jewish bigotry, Greenhoot was highly esteemed and served as a city alderman in the 1870s and 1880s. Greenhoot died at age 42, but the house remained in the family until 1927. It then served as a boarding house and apartments until Joseph and Doris Shipman purchased the home in 1937.

The Louis Johnson House at 517 Ogden Avenue is a Carpenter Gothic home built in 1905. At some point, they lifted the house to add a poured foundation basement. In 2008, the owners painted it in different colors to bring out the unique details of the architecture.

The Charles Brotherton House Marker near 606 Ogden cites where one of Escanaba’s earliest settlers built a home in 1852. Brotherton’s surveying work helped lay the foundation for the first influx of Escanaba settlers that came a decade later. He worked as a surveyor for the Chicago and North Western Railway from 1865 until he died in 1908. 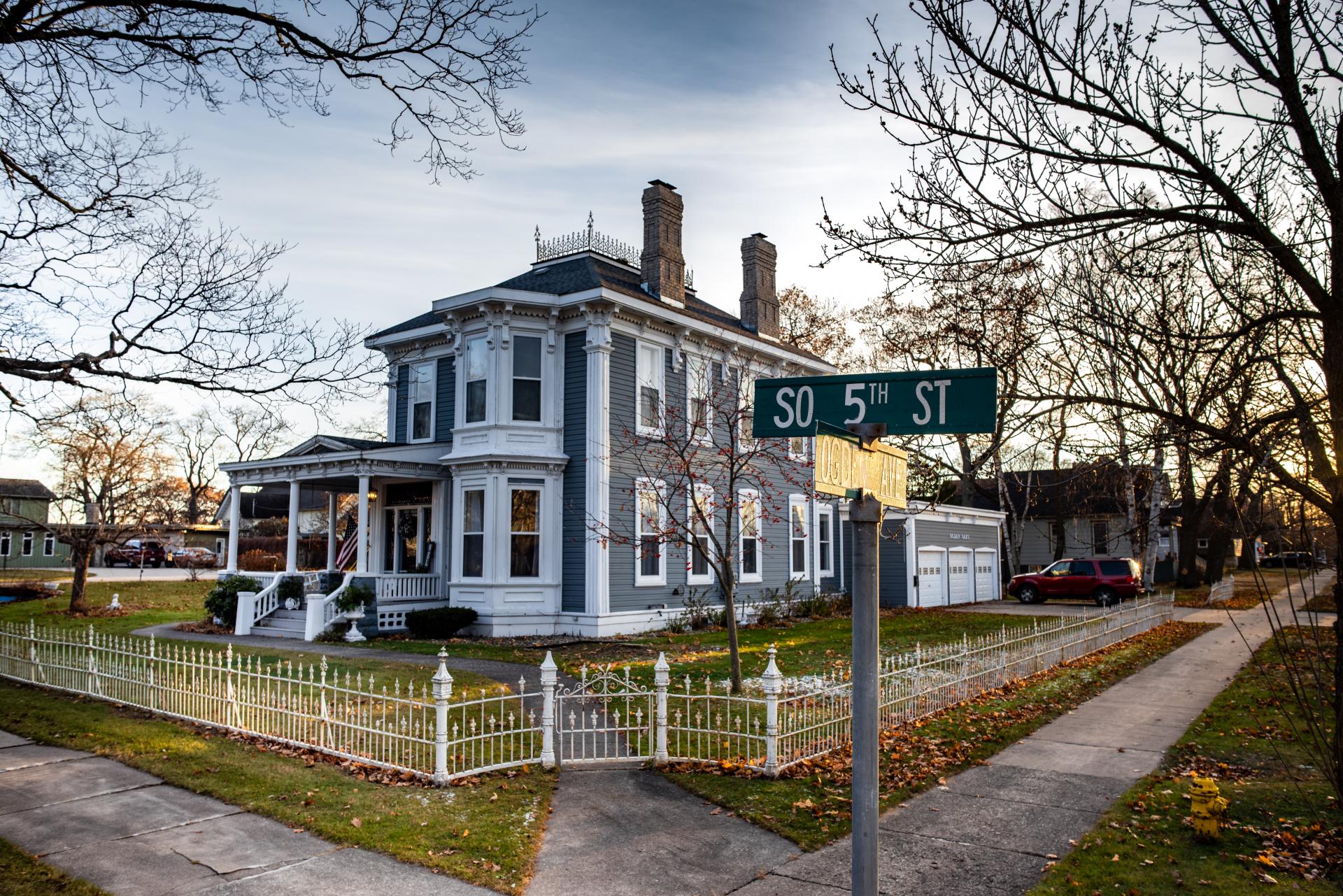 A block to the east, the 700 block of Lake Shore Drive (formerly Michigan Avenue), has several beautifully preserved homes. These include 700 Lake Shore Drive, the 1902 W.W. Oliver House. Oliver owned and operated a hardware store in the 400 block of Ludington Ave. At 710 Lake Shore Drive is the Ole Erickson House, a Classical Revival style home built in 1908-09. The owners sadly had little time to enjoy this beautiful home. W.W. Oliver, his wife and his daughter died in a car-train accident in 1909. Only the chauffeur survived.

At 742 Lake Shore Drive is a Colonial Revival-style home, the Lawrence Jacobs House built in 1923. Lawrence Jacobs made his fortune as the manager of the Delft Theater and the Strand Theater. The John Christie House, a 1901 Queen Anne-style home, is at 750 Lake Shore Drive. Mr. and Mrs. Christie were hoteliers and made the House of Ludington a first-class destination. The home was then purchased by “Big Bill” Bonifas, a man who made his fortune in the lumber business. He and his wife, Catherine, gave several bequests to local charities and institutions.

There are many more historic homes to see in the Ogden neighborhood and neighborhoods off Ludington St. Take time to explore and if you have questions, be sure to stop in the Delta County Historical Museum for answers.

This is our story — as ancient as our limestone bluffs

The story behind the 150+-year-old church in Escanaba