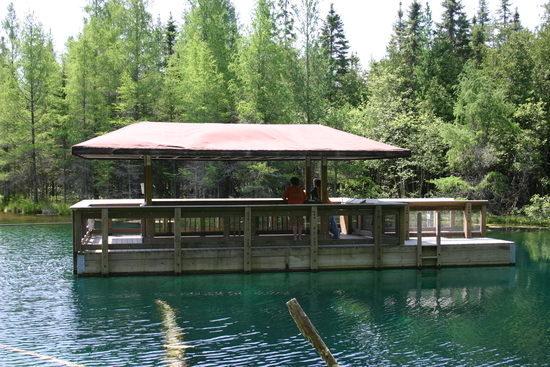 Palms Book is a rewarding side trip for the vacationer touring the Upper Peninsula, for here can be seen one of Michigan's alluring natural attractions -- Kitch-iti-kipi, The Big Spring. Two hundred feet across, the 40-foot deep Kitch-iti-kipi is Michigan's largest freshwater spring. Over 10,000 gallons a minute gush from fissures in the underlying limestone. The flow continues throughout the year at a constant 45 degree Fahrenheit. By means of a self-operated observation raft, visitors are guided to vantage points overlooking fascinating underwater features and fantasies. Ancient tree trunks, lime-encrusted branches and fat trout appear suspended in nothingness as they slip through crystal waters far below. Clouds of sand kept in constant motion by gushing waters create ever-changing shapes and forms, a challenge to the imagination of young and old alike.

The legend of Kitch-iti-kipi is said to be about a young chieftain whose girlfriend got the best of him. He told her he loved her far above the other dark-haired maidens dancing near his birch bark wigwam. Prove it, she insisted. As a test of his devotion, she declared that he must set sail in his canoe on the pool deep in the conifer swamp. He was to catch her from his canoe as she leaped from an overhanging bough. His canoe overturned in the icy waters and he drowned. It turns out that the maiden was back at the village laughing at his foolish quest. According to legend, the Spring was named Kitch-itikipi in memory of the young chieftain who went to his death in the icy waters in an attempt to satisfy the vain caprice of his ladylove.

Other legends tell of Chippewa parents who came to the pool seeking names for their newborn. They supposedly found names like Satu (darling), Kakushika (big eye), Natukoro (lovely flower) and We-shi (little fish) scribed in the sounds of the rippling water. They attributed healing powers to the waters.

A drop of honey on a piece of birch bark dipped into Kitch-iti-kipi and presented to a loved one was to make them true forever. Another legend concerned the tamarack growing on the banks of Kitch-iti-kipi. A small piece of the bark ground in a mortar and pestle and placed in an individual's empty pockets would be replaced by glittering gold at exactly midnight. Whatever the legends, visitors to the spring loved them. Kitch-iti-kipi is said to have many meanings in the Chippewa language-The Great Water; The Blue Sky I See; The Roaring, Bubbling Spring. Others called it the Sound of Thunder and Drum Water, even though the quiet is eerie. Whatever its name and legend, Palms Book State Park continues to draw curious visitors.

Although it was a black hole all but hidden in a tangle of fallen trees, John I. Bellaire fell in love with the Big Spring in the early 1920s. Bellaire had come south from Seney, leaving the rip-roaring lumbering town after the white pine was gone to open a Five and Dime store in Manistique. Around the oval pool (measuring 300 feet by 175 feet) vegetation grew lush, draping over the piles of trash left by a lumber company which operated nearby. The Big Spring wasn't too different in formation from other sink holes in the area, except that it was tapped into a fast-flowing spring. Bellaire, however, saw through the debris, envisioning the beauty of the emerald bottom of the pool. He watched the sand bubble and roll as hydrostatic pressure forced water through the narrow openings at the bottom. Bellaire could have bought the property for himself, but his vision of preserving it through public ownership prevailed. In 1926 through an arrangement with Frank Book who represented the Palms Book Land Company, Bellaire arranged for the sale of almost 90 acres (including the Big Spring) to the State of Michigan for $10. Deed stipulations called for the property to be forever used as a public park, bearing the name Palms Book State Park. Additional lands through tax delinqency and land exchange eventually brought the total park acreage to 308.

The Civilian Conservation Corps and other groups eventually constructed a raft, dock, concession stand and ranger's quarters, leaving Bellaire the task of showing tourists the bubbling pool. Taking great pride in the spring, Bellaire often closed his store to personally escort interested visitors to the sacred site. In later years, Bellaire confessed to former Indian Lake State Park Manager Vic Haas that he and a poet of sorts from the Western U.P. made up the Indian legends of Big Springs themselves. He said they did it to attract visitors. Bellaire was already in his middle 70s when Haas came to Palms Book in 1948. Haas said Bellaire still visited the pool almost daily even then. The self-guided observation raft and the trail leading to it are ADA accessible.

Location: Palms Book State Park is located at the northern terminus of state highway M-149, a 15-minute drive north of US-2 at Thompson.