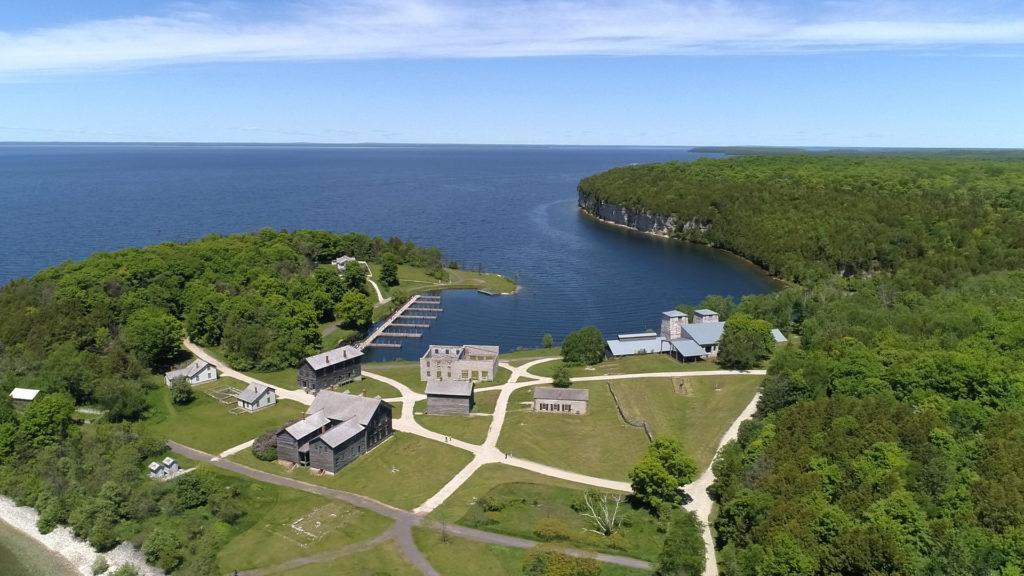 As you start off your list of spring things to do in Fayette, Michigan, the first item should be uncovering a time capsule. That’s what a visit to Fayette Historic State Park promises!

Tucked along Snail Shell Harbor, there are some nineteen structures that stand within what is now a historic townsite. They are the remnants of a time when the cost of a suit was $17, profitable employment was rare and many children sacrificed their education to help out at home. It was a time of boom, and every boom brings a consequential bust. When walking the roads of Fayette one must be careful not to fall blind to the many stories eager for their shot in the light. Yes, buildings are what remain visible to the eye in this old ghost town, but to the nineteenth century iron industry entrepreneurs, they saw an opportunity, a hope for prosperity and something to leave behind for their children. This is the story of that legacy, left by one generation and rediscovered by another.

According to the Report on the Machine Shop and other Shops at Fayette Iron Works by Larry Lankton in 2018, Fayette, Michigan, was an attractive prospect. In 1864, the Peninsula Railroad made the connection between Negaunee Mine to Escanaba, which soon acquired an iron loading dock and later became a bustling port city. This location allowed for a longer shipping season and was more cost-effective than shipping in Lake Superior.

The Jackson Iron Company, which operated iron mines in Negaunee, especially had their eyes set on Snail Shell Harbor. In 1867, Fayette Brown the company agent (and namesake of the town) was given the okay to start construction of an iron smelting operation. Construction in Snail Shell Harbor began just two years after the Civil War ended, reducing what was an influx in demand for pig iron for the production of cannons, pistols, rifles, and railroad locomotives. In no time, the first furnace was up and running in December of 1867, and a second was constructed in 1870. By smelting ore locally, it could ship pig iron off to larger markets.

To put it simply, smelting is using heat to separate the bad stuff from the good stuff. Here is how the Jackson Iron Company’s process worked. First, the raw iron ore would come in from Negaunee where it was mined and board a train to Escanaba. Upon arrival, it would be put onto scows dragged by tugboats on their way to Fayette. Lastly, the pig iron was put into the furnaces there to remove impurities. Voila, you have pig iron. In other, simpler terms, smelting is the process of heating metal to extract a more desirable base metal.

These large furnace towers are enchanting to the eye and the most noticeable feature about the Fayette townsite. You can’t miss them. Perhaps this was on purpose because the town was built for one purpose: its iron production. And produce, it did. These furnaces were medal winners at the Olympics of nineteenth century smelting (at least in the Upper Peninsula) and produced a whopping 229,288 tons of pig iron. For the people who once lived there, these towers were an everyday reminder of what the foundation of existence was for this little community. 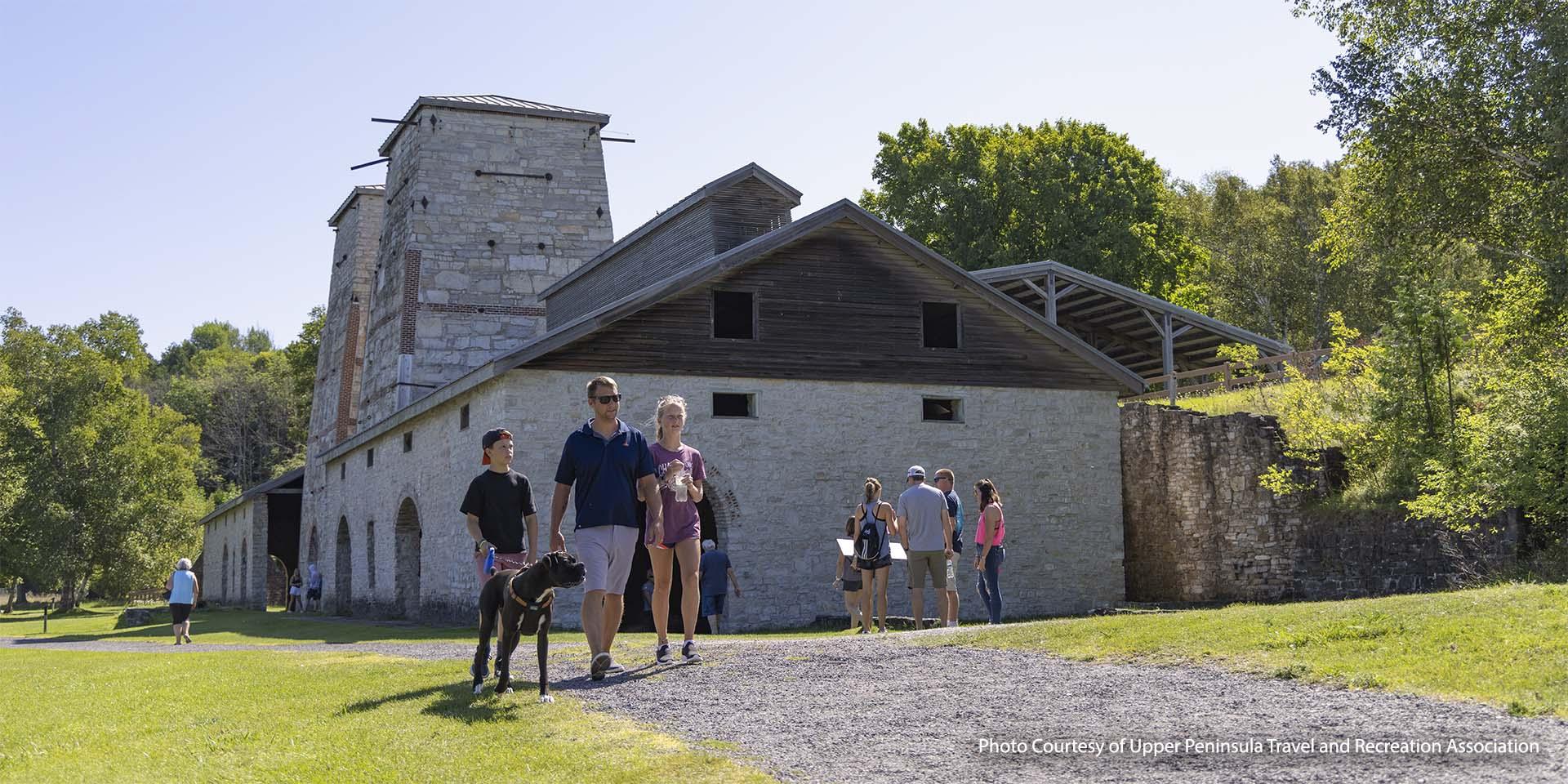 When the town was booming

It wasn’t long after Mr. Brown first visited Snail Shell Harbor before an entire town appeared on the shoreline. Lankton states, “The Mining Journal of Marquette reported on Nov. 6, 1869, that Fayette by that date had a superintendent’s house, nine good frame houses and 40 “comfortable” log houses.” Lankton’s 2018 report also notes that by the late 1860s, Fayette was home to a town hall, hotel, boarding house, ice house, meat market, apothecary and a doctor’s office. Much of the town was built by contractors that the Jackson Iron Company hired out. There were as many as 38 laborers on the company accounts who were responsible for creating the remains you see today.

Lankton’s report states “In the Escanaba Tribune of July 2, 1870, the paper expressed the opinion that Fayette was about “as independent a little community as one usually meets.” This self-sustainability would not have been possible without the many shops in Fayette that were responsible for building and repairing structures. Let’s not forget the many resources that this little location in the Upper Peninsula provided. If this was the game Settlers of Catan, Fayette would be the winning spot on the board.

The limestone cliffs that trace the shoreline of Snail Shell Harbor served as more than just a breathtaking view. All of the framed residences, commercial buildings and industrial structures were made from limestone quarried from the limestone cliffs. This limestone also served a crucial role in the iron production process and was used as flux to help rid of impurities.

Another prized resource that served this self-reliant town well was timber. If you have ever traveled to the Upper Peninsula, you know there is no shortage of trees. Fayette needed timber in order to create many of the structures but timber was also necessary for making charcoal. A lot of charcoal. To put it in perspective, about 35 chords of timber were burned in one sitting and at one point, there were over 60 kilns in 10 miles of Fayette. It is no surprise that the charcoal was used to heat the furnaces for the iron production.

You had all you needed right there. You needed a house built? The carpenter’s shop had you covered. Supplies? Walk yourself on down to the Company Store. Food? Just around the corner at the Meat Market. The only thing Fayette didn’t have was a garbage system. Which would have come in handy with all the worker’s kids running around barefoot. This little community was set-up quite well to withstand. The only thing that could stop it was if the company closed up shop. Which it eventually did. 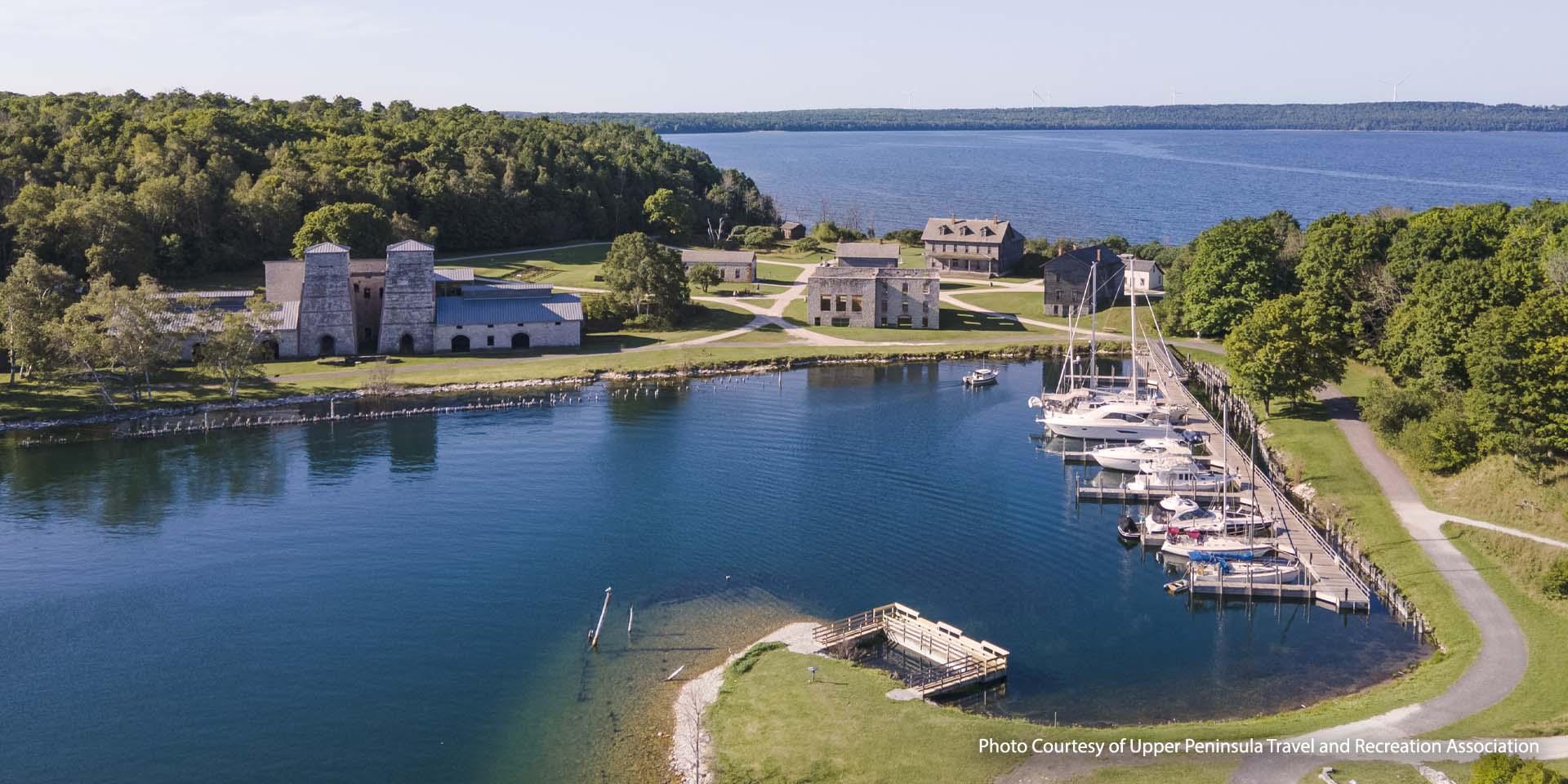 Like the rest of the buildings in this self-sustaining town, the materials were sourced locally. In this case, the Machine Shop was constructed of limestone. The sun descends into the interior of the building from six windows and its chimney towers into the sky. Lankton notes that the windows were originally flanked by wrought iron shutters to prevent fire, which was not an uncommon downfall to many of the buildings in Fayette. This shop is unlike your dad’s modern-day man cave filled with Bosch supplies that run off conventional power sources. According to Lankton, the machines in this shop were powered by a line shaft system that used a steam engine with all sorts of pulleys and belts. These systems were likely not up to speed with today’s OSHA standards. Lankton states, “The greatest danger was to catch a finger, hand, sleeve, tie or pant leg between a belt and a pulley. Such accidents seriously injured or killed workers who found themselves suddenly wound up in a machine”.

We were lucky enough to get ahold of some bios on the machinists of the 1800’s from the park, one of which was Robert Bassler. There’s not a ton of information on Mr. Bassler but one can assume what his life might have been like. According to Lankton, the machinists didn’t perform the same duties every day but rather they worked on whatever job came in. The tools were also fit to work on any variety of tasks. Mr. Bassler was paid $75 per month according to the payroll records of September 1886 and April 1887, and he paid $5 of that toward his rent. He was believed to be a middle-to upper-class citizen compared to someone receiving $40 a month working in the furnace. According to Lankton’s report, with that pay, Bassler was likely the master machinist. These machinists needed more background knowledge than just operating power-driven machine tools because a great deal was done by hand. It is uncertain how many people staffed the machine shop but it was likely anywhere from three to six men.

Another man with the Bassler name also worked in the shop and only earned $1.65 as a machinist and $1.75 for the locomotive rate. When not working, Robert Bassler was a member of the Fayette Brass Band and played the solo alto — likely at Fayette’s Music Hall.

Lankton assures that there were two times where real emergencies occurred that in turn required the smelting operations to shut-down. If the machine shop was unable to handle the necessary repairs, the task would be passed on to a bigger machine shop like the one in Marinette. Regardless, the machine shop in Fayette was always on standby to repair any necessary part to keep the Jackson Iron Company in business and the workers employed. 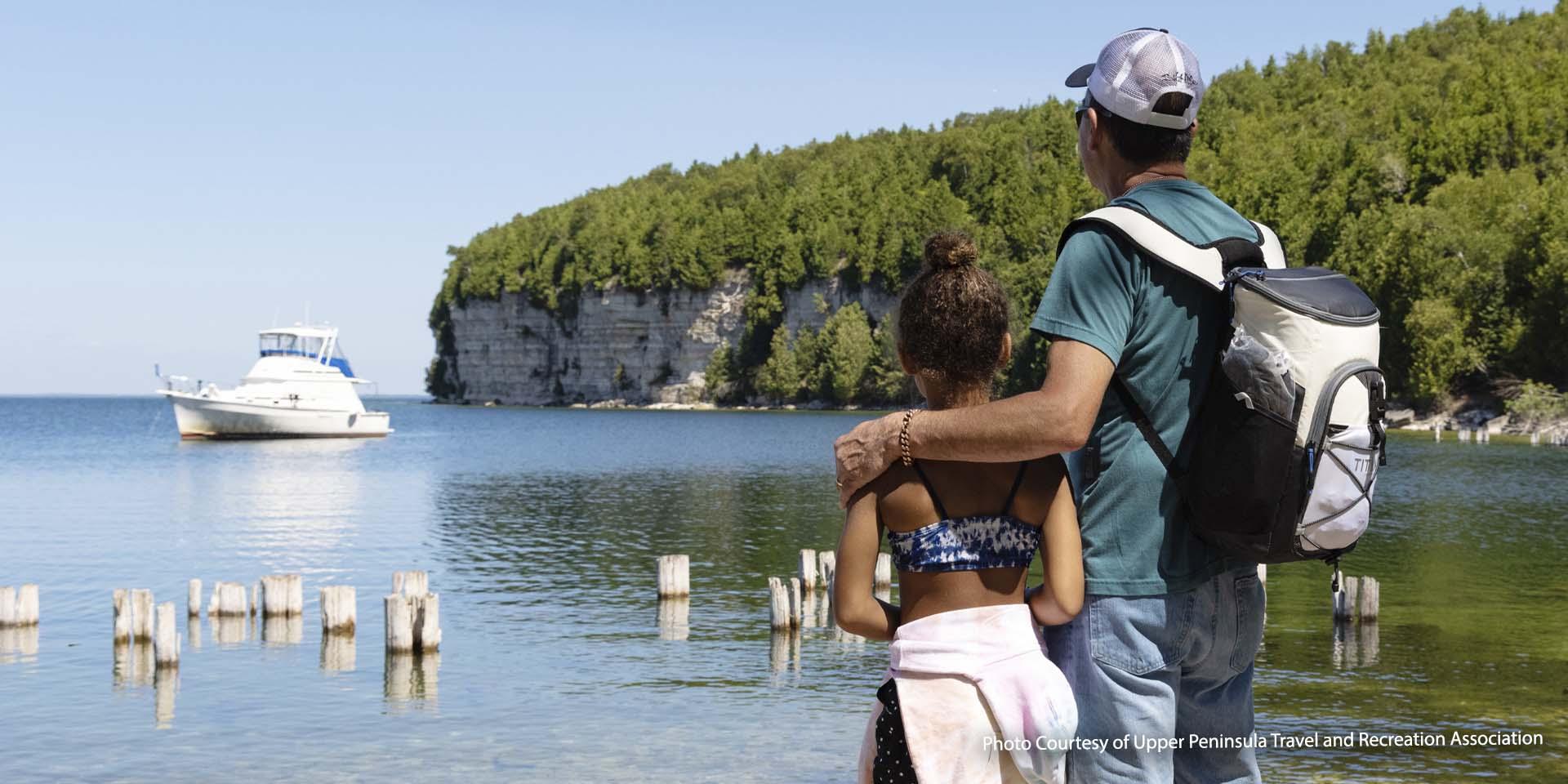 The Fayette Visitors Guide notes that in 1879, the hotel stated that it was “a favorite summer resort” and a group of visitors from Chicago boasted that it was “the most pleasant place of amusement they had yet found”. A slower pace of life, Fayette must have been tucked away from the rest of the world. It still is, long after the Jackson Iron Company left town — not finding the business very profitable — it remains vacant. It must have been heartbreaking for those who had called the harbor home for 20 years but couldn’t find security in recreating a livelihood. But those who did stay behind after Fayette’s peak were likely lured in by the beauty of Snail Shell Harbor. And who could really blame them? Life must have been difficult without the promise of a steady-paying job that the Jackson Iron Company provided or the many shops that no longer found it practical to remain in the area. But those who first came to the harbor optimistic and able to withstand the hardships probably found that survival was as rewarding as it gets.

Today, Fayette is a great place to visit and experience a different time in history. You can walk through the remaining structures and learn about life back in the late 1800’s. The park also has a campsite with electric hook-ups and is steps away from the townsite and Lake Michigan. Oh yeah, and a beach, a boat launch, harbor slips and five miles of hiking and cross-country trails. Much like the nineteenth-century people of Fayette, you're set-up pretty well to enjoy yourself. Careful though, you might run the risk of still wanting to explore this time capsule long after your vacation is over. Good thing you can come back!