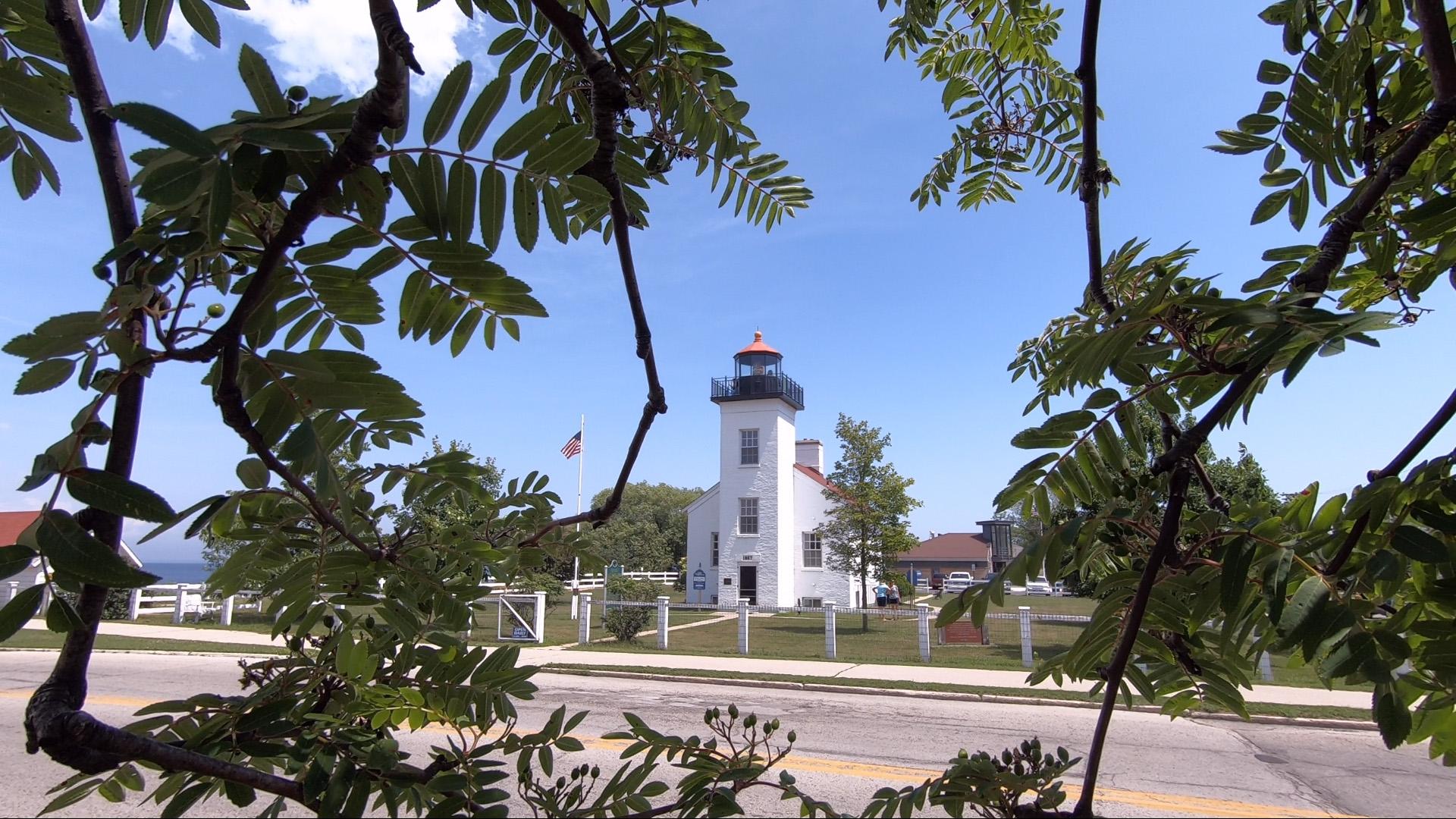 Anchored in stone and the past, two Delta County lighthouses have survived the ravages of time and still stand vigil on the Bays de Noc. In years past, the beacons of both Sand Point and Peninsula Point lighthouses guided sailors and their ships to safe harbors. Today the lighthouses draw visitors to explore the romance and architecture of a bygone era.

Visit during the summer months to climb the tower and see a beautiful panoramic view of Ludington Park and downtown Escanaba. The Sand Point Lighthouse and Historical Complex is at the end of Ludington Street and across the street from the Escanaba Municipal Marina. This historical Michigan lighthouse is now fully restored, furnished, and complete with a Fresnel fourth class lens still residing at the tower’s top.

Take me to Sand Point Lighthouse! 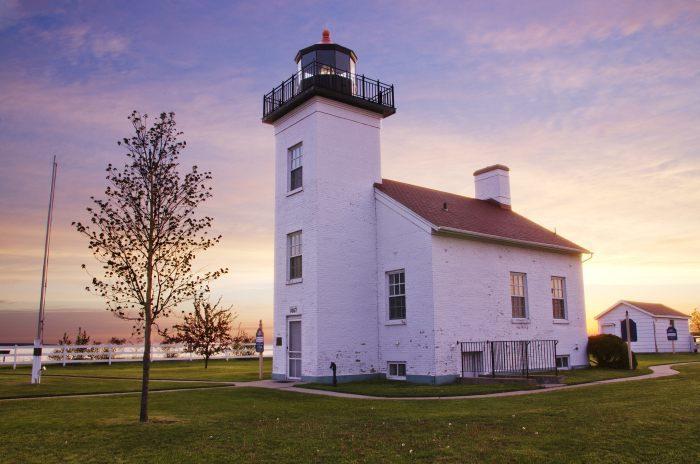 Mary Terry was one of the first women lighthouse keepers on the Great Lakes and would feel right at home in the fully furnished and restored lighthouse if she visited today. Rumors abound that decades after her death, she occasionally makes an appearance to check on the lighthouse.

Ghosts and rumors also surround the ruins of the Peninsula Point Lighthouse. A fire destroyed the keeper’s house, and today all that remains is the lens tower. The grounds where the lighthouse once resided is a park that comes to life every spring with the blooming of the lilac bushes. The park is complete with an interpretive geological trail, signs explaining the lighthouse’s history, and plaques discussing the Monarch Butterflies that migrate through the area every fall. Visitors can still climb the wrought iron spiral staircase to the top and enjoy panoramic views and the clean breezes of Big and Little Bays de Noc.

The 40 ft. lighthouse tower is an easy climb on a circular staircase to a beautiful view from the top’s platform. The spectacular panorama of lake Michigan is unparalleled. Be sure to bring your camera. 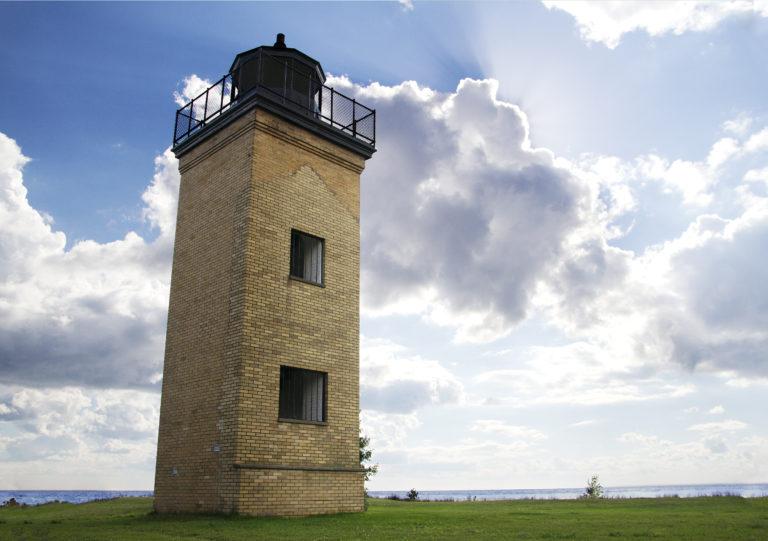 Congress appropriated funds for the building of a lighthouse on the Stonington Peninsula on July 20, 1864. This marked the beginning of an era of lighthouse history that, well over a hundred years later, can still add fuel to the fires of imagination. The wooden sailing ships needed navigational help to keep their hulls from being torn open on the treacherous shoals of the channels leading to safety at the docks of Escanaba and Gladstone, Fayette, and Nahma. There were busy ports transporting fish, lumber, iron ore, and other products. The shipping industry was growing at a rapid rate.

The U.S. Government recognized the need for a lighthouse on the peninsula to navigate these dangerous shoals and reefs separating Big Bay de Noc, Little Bay de Noc, and Green Bay of Lake Michigan. 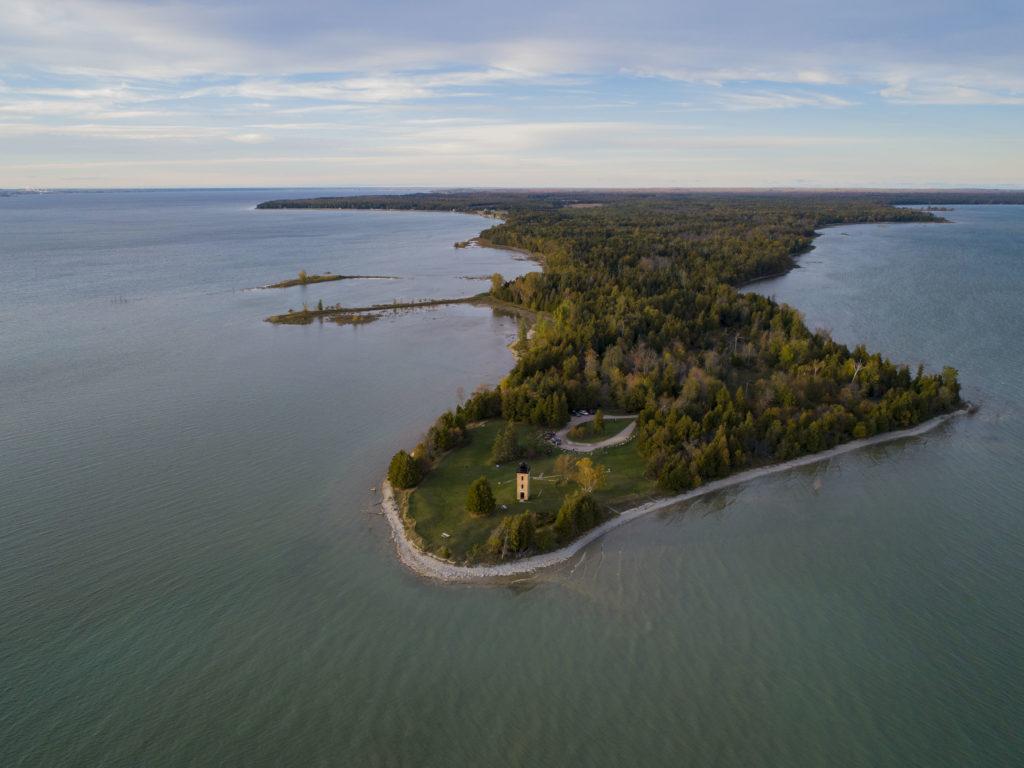 The Michigan historical lighthouse at Peninsula Point was completed in 1865, and the lantern was lighted for the first time. The building consisted of a 40 ft. tall light tower with a beacon lit by an oil lamp and reflectors. Attached to the north side of the tower was a 1-1/2 story brick home for his family.

The first lighthouse keeper was Mr. Charles Beggs, who died there in 1887. The second, Mr. Henry Corgan, and the third, Mr. Peter Knutsen. In 1889 Captain James D. Armstrong was appointed keeper, and this was home to him and his family until 1922. At this time, an automatic acetylene light replaced the hand-operated oil lamp ant it was no longer necessary to occupy the site. However, Captain Armstrong continued to be responsible for Peninsula Point until 1931.

The light went out for the last time in 1936. In 1937, the USDA-Forest Service was granted custodianship, repairs were made to the buildings, and the Civilian Conservation Corps constructed public picnic grounds.

The Stonington Grange took over the maintenance of the structure and grounds. In 1949, they won first prize in their State contest for their work at the Michigan historical lighthouse.

The house portion burned to the ground in 1959. The debris was cleared, and the damage to the north side of the tower was repaired in 1962 by the USDA Forest Service.

The USDA Forest Service operates the grounds as a picnic area, with tables and grills on the lawns surrounding the tower. Pit toilets are available, as well as drinking water.